The corkscrew generally consists of a pointed metallic helix / thread (often called the 'worm') attached to a handle. The person using the corkscrew simply grips the handle and screws the metal point carefully through the centre of the cork, entwining the cork and corkscrew so that moving one moves the other, and therefore removes the cork from the wine bottle.
The handle of the corkscrew, allows for a commanding grip to ease removal of the cork-stopper/ closure. It is thought that the design derived from the 'gun worm' which was a device used by musket-men to remove unspent charges from a musket's barrel in a similar fashion, from at least the early 1630s.
The corkscrew is possibly an English invention, due to the tradition of beer and cider, and 'Treatise on Cider' by John Worlidge in 1676 describes 'binning of tightly corked cider bottles on their sides', although the earliest reference to a corkscrew is, 'steel worm used for the drawing of Corks out of Bottles' from 1681.
In 1795, the first corkscrew patent was granted to the 'Reverend Samuell Henshall', in England. The clergyman affixed a simple disk, now known as the 'Henshall Button', between the worm and the shank. The disk prevents the worm from going too deep into the cork, forces the cork to turn with the turning of the crosspiece, and thus breaks the adhesion between the cork and the neck of the bottle. The disk is designed and manufactured slightly concave on the underside, which compresses the top of the cork and helps keep it from breaking apart.
A 'sommelier knife' or 'waiter's friend' is a corkscrew in a folding body similar to a pocket knife. It was conceived by the German Karl Wienke in 1882 and patented in Germany, England and in America. At one end a short arm extends to brace itself against the lip of the wine bottle for leverage when slowly removing the cork.
Some sommelier wine-knives have two steps on the lever, but take care not to chip the edge of the glass bottle. A small hinged knife blade is housed in the handle for carefully cutting and removing the top part of the wine-foil sleeve, found around the neck of many wine bottles with a cork closure. *(the images shown below are a part history of the design evolution).

The Butler’s Friend is thought by many to be the ideal wine utensil for removal of fragile vintage corks. It can be at times the safest way to remove corks from valuable old vintage bottles, especially: Bordeaux, Port, Madeira, Sauternes and other quality wines with fragile and difficult long corks. A precision engineered tool specifically designed to safely remove even the very oldest and most fragile of corks from vintage, cellared wine bottles.
It is so called - because it allowed the downstairs staff (i.e. Butler) when the master of the house had guests and before serving a bottle of wine for dinner. They could remove the cork, taste the wine, check for any faults, plus decant and filter the wine - and then replace the wine and cork without a trace.
Although it was often wondered, but never dared commented, what did they sometimes top up the wine with. The two prongs are inserted either side of the cork, which may then be removed by a combined gentle twist/turn and pulling action - a stylish way of removing a cork.
The Butler’s Friend is a German invention, believed to have been invented in 1864 and then patented in the U.S in 1879. Also known as the: ‘Two-pronged (Gypsy) cork-puller’ - which is the name used in Russia; because it is used to remove corks without damage. In order to replace the cork: after changing the good wine with a poor substitute. As the Gypsy; has never figured in Russian folklore as a model of integrity. In France, where they often use this type of cork-pull in restaurants, they refer to it with a certain amount of sarcasm as the ‘Maitre D's’ corkscrew for similar reasons.
The Butler’s Friend is ideal in circumstances where the cork is very old, fragile, brittle corks or soaked in wine, extra long in length or the bottle is to be put away after a dinner for later enjoyment. It can also be used in situations where the cork has stuck to the bottle-neck and needs to be pulled out, which occasionally happens with vintage port. The Butler’s Friend has two spring-steel prongs fixed in parallel to a handle and set at a distance approximately equal to the diameter of the cork. Shaped like a large key with a flattened oval handle about 5cm x 8cm, and two thin metal blades, approximately 10cm long, 5mm wide and 0.5mm thick.
First - the longer of the two prongs is pushed between the cork and glass; this is followed by the shorter one on the opposite side of the cork. Both are then pushed down between the cork and the bottle-neck with gentle force until they can go no further. The cork is then jammed between the two prongs. Then the handle is gently twisted and the cork simultaneously pulling of the handle causes friction to turn the cork and pull it out of the bottle. This operation requires a certain amount of skill - as the Butler’s Friend can inadvertently push the cork further into the bottle instead of removing it.
The traditional corkscrew is easy to use, as the spiral helix requires little force to insert, minimizing the chances of accidentally pushing an old cork into the bottle. But the problem with very old and crumbling corks, is that all the upward force of the lever action is exerted only in the middle core of the cork. This can result in removal of only this center part of the cork, with the outer sides of the cork stuck to the inside of the neck. You then have to try and scrape the cork out manually, usually difficult to do without at least some of the cork falling into the wine, then requiring decanting the contents through a filter.
Experienced wine enthusiasts will often have both devices, so as to use the appropriate tool to open a bottle. Though it is almost impossible to know in advance where the weakness of a particular cork will occur - will it be prone to sliding into the bottle (so better to use a corkscrew than a Butler's Friend or the *Durand shown below - combination of both), or will the core crumble and break in half. The Butler's Friend also includes a metal sheath for convenient, safe storage in a pocket or drawer. 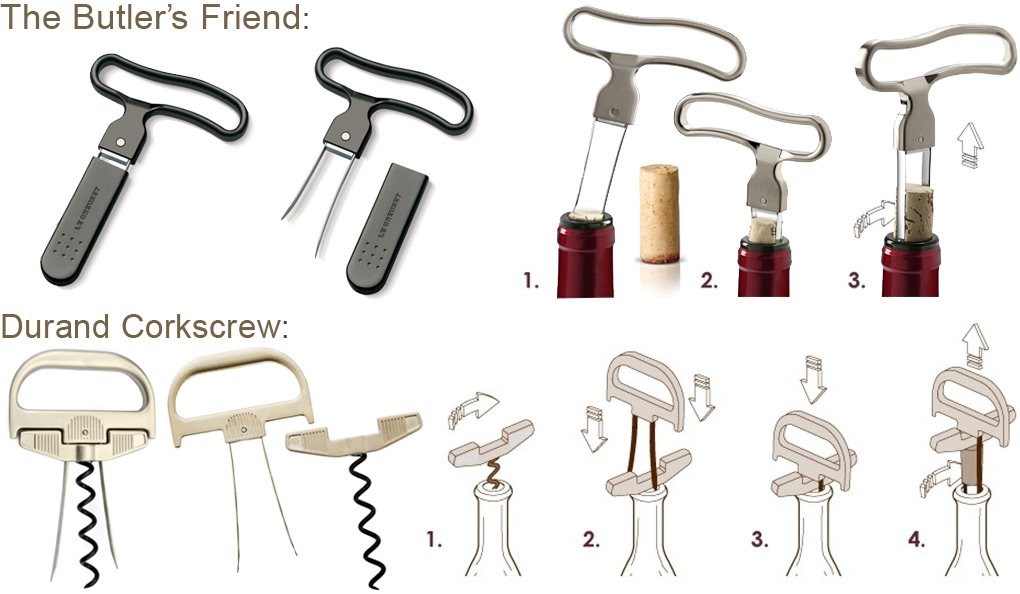 Cork that is used in wine bottles comes from the bark grown on a 'Cork Oak Tree' - a medium-sized, evergreen oak tree that is native to southwest Europe and northwest Africa.
The tree forms a thick, rugged and cork-bark and over time this bark can be harvested every 9 to 12 years. The harvesting of cork does not harm the tree and a new layer of cork re-grows, making it a renewable resource. The tree is widely cultivated in Portugal, Spain, Algeria, Morocco, France, Italy and Tunisia, with Portugal accounting for approximately 50% of the world cork harvest. Cork Oak trees typically live for about 200 to 250 years. The first cork (layer of bark) that is to be cut is generally from 25 year old cork trees, then another 9 to 12 years is required for the second harvest, and a tree can be harvested up to 12 times in its life.
Cork-bark harvesting is done entirely by hand using a special-shaped axe and without machinery. The bark is then dried outside for around 6 months - before classified for different uses, approximately 15% of the bark is used for wine corks. The European cork industry employs approximately 30,000+ people across all areas.
Corks elasticity combined with its near-impermeability makes it suitable as a material for wine bottles. As late as the mid 1600's, French vintners did not use cork, instead using oil-soaked rags stuffed into the necks of wine bottles.
Approximately 13 billion natural corks are produced each year. After a decline in use as wine-closures due to the increase in the use of alternatives, corks have been making a come-back; this increase is due to more wine being sealed with cork rather than being sold in bulk. Top quality corks are expensive, and no matter what the cost, they have the risk of containing TCA (Trichloranisole) - cork taint (though research has been addressing this with a great deal of success) - *yes, some poor quality corks, can be susceptible to random oxidation due to their natural structure and variability. But is must also be said / added that a quality cork can be more durable than other wine closures.
A study made public in December 2008 by PriceWaterhouseCoopers, commissioned by cork manufacturer Amorim, concluded that cork is the most environmentally responsible closure for wine, in a one-year life cycle analysis comparison with plastic and aluminium screw-cap closures. The wine closure debate is complicated and on-going - 'a little knowledge can be more dangerous than none' - so at the end of the day, have confidence in corks and take each wine bottle as it comes.

Trichloroanisole or (TCA) as it is more commonly known - is a small and chemically simple molecule, which is very aggressive to ones sense of smell. TCA can be detected in dry white wine and sparkling wines at levels around two parts per trillion (0.000000000002 grams in a litre of wine), and in red and Port wines at around five parts per trillion.
Such low concentrations are difficult to conceptualise but it is similar to one teaspoon in a couple of thousand Olympic sized swimming pools. A single gram of pure TCA could badly taint the entire volume of wine produced in Australia each year.
The other less common contributors to cork taint are not much better having sensory thresholds of around 20 parts per trillion.
2,4,6-Trichloroanisole (TCA) is the natural compound that at higher levels can impart 'musty, tired or dull' flavours and aromas to wines. Wines that contain TCA at a detectable level are described as either being 'corked' or being 'musty', or having a 'muted, dull, flat' character.
Cork is a major source of TCA in bottled wine, although experts indicate that TCA in wine may be derived from sources other than cork, such as from oak barrels. Wineries in most wine-producing countries, along with the cork industry, continue their research efforts to minimize the presence of TCA in wine.
There is no conclusive evidence that wines that exceed any particular level of TCA will result in detectable negative characteristics for any significant segment of the wine drinking public. A number of award winning wines over the years have contain levels of TCA that are detectable by instruments but not noticed negatively by the consumer. There is no single, fixed level of TCA that distinguishes a 'good' wine from a 'bad' wine.
Perception of TCA by consumers is governed by many variables, including alcohol content, wine characteristics, and the sensitivity of the consumer. The consumer threshold of perception of TCA varies dramatically according to experience and inherited genetic capabilities. Research material indicates that the existence of minute traces of TCA in quality wines does 'not always' impair a quality or enjoyable experience. It must also be noted that TCA is less of a problem for the cork / wine industry with modern science being able to easily detect and with gentle processes remove TCA from the cork before it goes into the bottle.